Congratulations to LAW member Jon Watkins! On Saturday 19th September 2009, Jon entered the BCCMA (British Council for Chinese Martial Arts) 2009 Shuai Jiao Tournament. After defeating all his opponents to the finals, Jon beat his opponent 9 – 1 to become the appointed British Champion in this discipline. 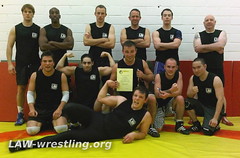 Jon with other LAW members

Jon will represent Britain in international events in Germany and America next year.

“My training at LAW has helped me tremendously in learning the technical physics of grappling as well as the advantages of a scientific systematic approach to competition training and coaching. LAW is more than a wrestling club, it’s a brother/sisterhood of individuals brought together by a sport and its community which makes it unique from other clubs. I owe my current and future achievements to my fellow club members and coaching team of LAW and I look forward to their assistance and continual “kick up my posterior” to better myself further. My ambition is to represent Britain in Olympic Wrestling.”

The BCCMA is a recognised official sports body by the Sports Council (UK) and the European & International WuShu Federation making it a respectable non commercial governing body outside the original Chinese realm of martial arts in the east.

Shuai Jiao (Chinese Wrestling) was practiced by the Imperial Army in 2697 BC making it the oldest existing systematic form of martial arts and the first recorded birth of wrestling in the world.